It was a gorgeous Sunday, perfect for finding fu dogs in Chinatown for the new art school losangelesgalleryofart.com

Waiting for things to open (other than rainbow bakery, where I got the most delicious egg tart) means sketching in action.

View from the only shady bench. 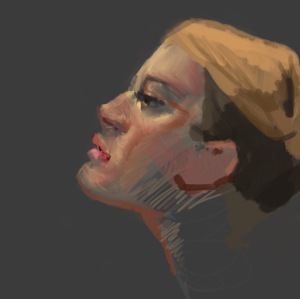 A sketch from the morning.

Both done with Procreate on the iPad with the apple pen, which I have many complaints about, mostly regarding the battery draining when not in use.

It was a gorgeous Saturday so I stopped by the ocean and the replica Greek palace, the Getty Villa.  NBD, just another weekend in Cali.

The marble is cool and shady.

A little sketch of some trees and columns and roofing.  Kuretake clean color real brush and staedtler pigment liners on toned paper.  Out of all the things I am allergic to, I have the highest allergy to olive trees.  They are, however, super gorgeous so I sketched them anyways.

Here is part two of my roses so far.

In my next step, I’ve gone ahead and filled in some major shadow shapes.  Keep in mind that *white* roses (or cream here,) are very, very light.  Their darkest form shadows, which is the shadow on the rose itself caused by the light being turned around the rose, is never going to be as dark as the form shadow on the much, much darker stem or leaf.  Because white is inherently a higher value than rich greens, it is impossible to think that if an object is white and laying in the same light as the green, unless painting deliberately chiaroscuro, it will get as dark as the green will. 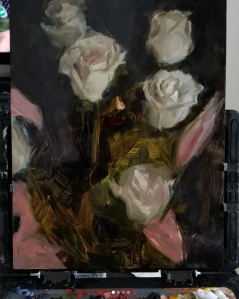 This is what I’m working on now, starting to really start to detail out the flower itself.  Each rose takes almost as long as a small portrait to me, because of each shadow plane and light plane.  It’s very interesting work!  I love to think about the edges and how they might guide my viewers eye around the rose itself, keeping in mind how that rose’s light and dark will relate to the others.

That’s all for now, until I paint some more on this!

I’ve been working on a painting of roses for the past couple months.  I know that sounds long, but it was really just “one two hour session,” and now, one more “two hour session” so it’s really not that long.  Cleaning up afterward has taken longer than the actual painting.  Just kidding, kind of.

Here is a neat look at some of the process of painting traditional roses in oil paints.  I use Lukas 1862, Michael Harding (yes, I swing both ways ;)) and some Williamsburg and W&N thrown in there.  Sap green is what really made my florals go from “ok” to “ok!” since before the only green I had pre-mixed was vridian.  I have now come to the conclusion (subject to change!) that vridian is easier to mix from my basic paints, and since it’s very expensive, I doubt it will be showing up as often as it was before.  It is still fantastic for skin tones, though. 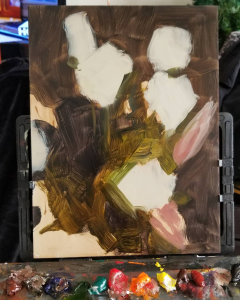 Step 1 – I really had an idea of where to place these, and of course it’s simply based on how they were arranged on the table.  You can see me watching My Lottery Dream Home in the background.  I admit right now it’s my life goal to be on that show. 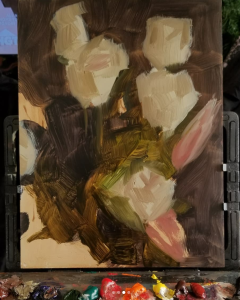 In step two I get more detailed about what I want this to look like.  Which roses do I want to be brighter? Which ones do I want to be darker?  This helps divide the space between them, with the brighter and higher contrast roses making the viewer feel as if it’s closer to them, and the darker, shaded, less contrast and less detailed making the viewer feel as if the rose is toward the back.

Rembrandt painting tip: Only one area on your canvas should be hit with the brightest highlight.  Since there will only be one plane closest to the light itself.  Not that I’m Rembrandt, but I try to keep this in mind.

That’s all for part one.  Tune in next time for part two!  Thanks for reading. 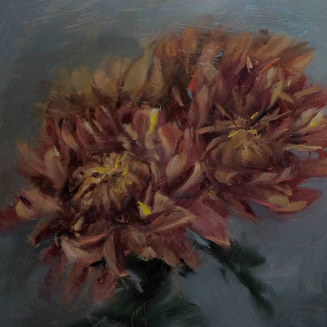 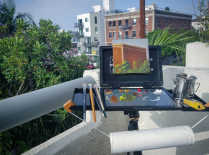 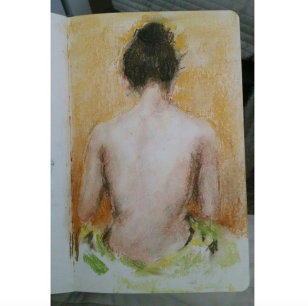 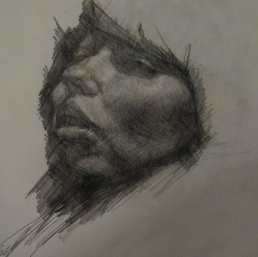 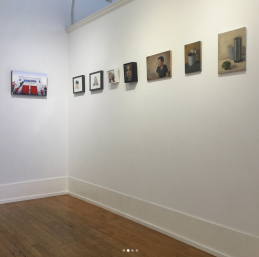